skip to main | skip to sidebar

The Honor Sash is made from a English style Mohair horse Girth. It is another one of those found parts that were used for the original costume. Nylon black webbing was added to the buckle at one end allowing it to be belted around the waist. It was originally designed to go on the underside of a horse and attach to each side of a saddle. So the girth has the buckles and the saddle has the straps.

I bought the white 36" girth and dyed it with scarlet and wine Rit dyes. First I did just the wine. Which made it more of a purple/pink color. Just horrible. Then I got the scarlet and had it in the dye bath for 90 minutes to get the color it's now. The ties that held the girth together had to go as they where more a peach color and not on the original costume. So I removed them. However this caused another problem. Now I had two halves of the girth. So I grabbed some extra gray fabric, laid it behind the girth and stitched the two halves together. Worked great, now it's finished.
Posted by Patrick Kenney at 1:14 PM No comments: 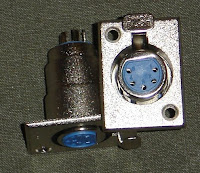 Here is a found item that is seen on the backside of the Rocket pack. By backside, I do not mean the side you see when looking at my back, but the inside of the rocket pack that faces my back that no one sees. That's right, I got a detail that literally no one will know about or see, but it's there on the original pack so it will be on mine. It is a female 5-pin XLR Connector. On a strip of masking tape under it written in sharpie "+4- feeds & switch returns for wrist units". It was most likely used to supply power to the LED's and switches on the gauntlets.
Posted by Patrick Kenney at 10:15 PM No comments:

Well I guess I am never happy. I went back and revisited the Hip pouches for both ESB and ROTJ. I bought a cotton twill fabric this time, and edited by pattern a smiggin. Just enough for that slight difference. I then dyed it a dark Coca Brown. Totally the wrong color. I used three packets of color removal to get this color of a lighter tan. I think I like these pouches enough for them to be the final version.

On a related note of 'revisiting', I again have removed the sleeves from the vests. I am just not happy how they look and plan to redo them yet again.
Posted by Patrick Kenney at 10:05 PM No comments: